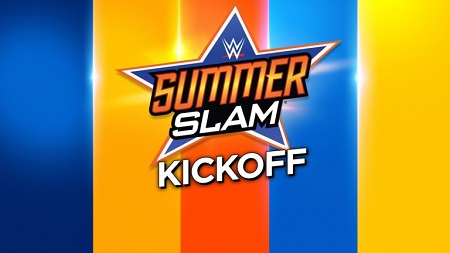 SummerSlam (2019) was a professional wrestling pay-per-view and WWE Network event produced by WWE for their Raw, SmackDown, and 205 Live brands. It took place on August 11, 2019, at the Scotiabank Arena in Toronto, Ontario, Canada. It was the thirty-second event under the SummerSlam chronology and the second event to be held at this particular venue (the other being the 2004 event).

Thirteen matches were contested at the event, including three on the pre-show. In the main event, Seth Rollins defeated Brock Lesnar to win the Universal Championship for a second time. In other prominent matches, Bray Wyatt in his new “Fiend” persona defeated Finn Bálor, Charlotte Flair defeated Trish Stratus by submission, Kevin Owens defeated Shane McMahon to keep his job, Kofi Kingston fought Randy Orton to a double countout to retain the WWE Championship and Goldberg defeated Dolph Ziggler.